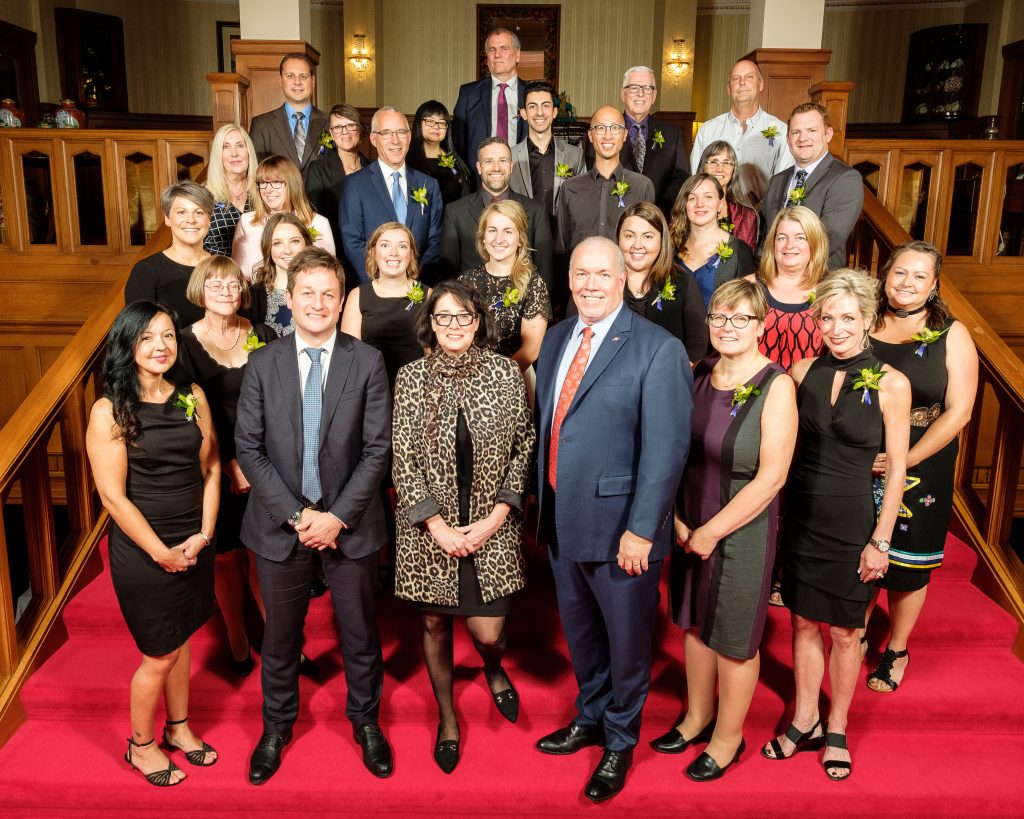 “When they called my name, I couldn’t believe it. I was actually shaking, holding the award,” said Jeannine Lindsay, winner of the Outstanding Support category. “To go from being in high school and not really learning about indigenous education, to receive an award for helping implement it, was amazing.”

Lindsay (see video here), a CUPE 439 member, works as an Indigenous Support Worker at Lake Trail Middle School in Courtenay. She was nominated for the award by CUPE member Deborah Storey, a library clerk at the school.

As well as the actual award, Lindsay received a cash award of $3,000 for professional development that she is using to attend an indigenous education conference in Edmonton in November. Her school also receives a $2,000 contribution to their school community for professional learning.

One-third of the school population is indigenous at Lake Trail Middle School. Coming out of high school, Jeannine became a cultural resource worker helping to integrate culture into the classroom. She talked to students and demonstrated jingle dancing, her traditional dance, and taught students how to make dreamcatchers and what they meant to her Anishinaabe culture. Lindsay took First Nations Studies at Vancouver Island University to learn more about West Coast indigenous culture.

“Education Assistants and support staff are really the glue that holds everything together.” said Lindsay. “Being a support worker is one of the most rewarding jobs.”

This year is the first time ever that a category for support staff was included in the Premier’s Award of Excellence in Education Awards. Awards were announced at the ceremony on October 5 where the Ministry of Education showed videos of the three finalists in each category.

Other support staff finalists were Richard Morgan, a Custodian at Penticton Secondary School (Pen-High) and Jackie Grypink, an Educational Assistant at Hillview Elementary School in Vernon.

CUPE 523 member Richard Morgan (see video here), a Custodian at Penticton Secondary School, was surprised and pleased that a custodian was a finalist. Morgan has worked as a custodian for 25 years. In Penticton he has been involved in a lot of activities including coaching at KVR Middle School, helping coach girls’ soccer at Pen-High, and refereeing soccer on weekends.

Morgan’s philosophy is to empower students so that they feel that the school is their school. He cares about students and finds ways to make a difference for them. He worked with one special needs student by taking him to the grad lounge to play ping pong for ten minutes at a time. Not only did that give the student a break when he needed one, it helped the grade 12 students see how to interact with a person who has special needs.

“CUPE support staff here at Pen-High are very good at going the extra mile and making themselves available to students,” said Morgan. “Rather than just walking down the hall and saying hello, we try to interact and have a bit of a conversation with students. School’s not just about academics.”

Morgan got to know most of the kids currently in Pen-High from KVR Middle School where he worked until he was laid off when daytime custodians were cut. He believes that middle school is the most challenging because of the high energy and the maturity level of the kids.

“When I first applied for the job at KVR, all the windows were smashed, hallways were noisy and there was litter and garbage everywhere,” said Morgan. Staff, including teachers, administrators and support staff really worked together to change that school.

Now he’s seeing a trend when a lot of kids in middle schools no longer have boundaries. “You can’t do it on your own,” said Morgan. “It has to be a group effort.”

That’s why Morgan would like to see day custodians put back into middle schools. “I think it would really help. It’s a start anyway – more visibility and a presence in the hallway,” He believes that kids should be allowed to do their homework, sit around, and socialize after school. “It gets paid back in spades and it’s better for the community.”

Morgan is an active CUPE 523 member and credits CUPE courses and education as still helping him today. “When I worked in North Vancouver at SD #44 I was able to take advantage of CUPE schooling in Shop Stewarding and conflict resolution. I still apply that training in my workplace today,” said Morgan.

CUPE 5523 member Jackie Grypink (see video here) has been an Education Assistant for 24 years and thinks it’s great that support staff were included in this years Premier’s Award for Excellence in Education.

“I think that support workers should be included because we are a huge part of our education system,” said Grypink. She enjoys working with kids at a K-7 grade school with “a wonderful staff and administration.” Grypink enjoys seeing students succeed – making goals and accomplishing them.

“Most of the kids appreciate what you do for them and are willing to learn from you.” Grypink has a love of art and enjoys sharing that with the kids. “In art, everyone is successful.”

Grypink thinks that one of the challenges in education is that there are not enough EAs or Indigenous Support Workers in school districts and that more need to be hired. “We have so many kids out there with needs of varying degrees and levels that we definitely can use more support workers for the kids,” said Grypink.

“I know that everything boils down to dollars and cents, but I think that the value that you get from support workers is just so huge,” she said. “There should be more. We are valuable and under-appreciated.”

Grypink hopes that they add in one or two more categories for support workers. “I was just honoured to be nominated,” she said.

“The ceremonies themselves were absolutely beautiful — very well run and organized,” said Grypink. “The meal and the whole event was beautiful and so well done.”

“I’d like to thank Premier John Horgan, Minister of Education Rob Fleming, and this NDP government for honouring the important work CUPE members do in schools,” said Davies. “It’s good to see education support workers finally being recognized for their dedication and service to students across B.C.”