The K-12 Provincial Bargaining Committee (PBC) is working diligently to ensure we attain gains for our members in this early round of bargaining discussions.

“Early discussions have been respectful and our committee has been working hard to achieve a provincial framework agreement that improves working conditions for our
members,” said K-12 President’s Council President Warren Williams.

Find bargaining updates and additional information on the updated K-12 website at: bcschools.cupe.ca 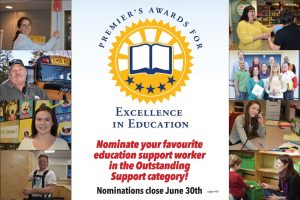 The Premier’s Awards for Excellence in Education, for the first time ever, include a category for support staff in public schools. Nominations have been extended and now close on June 30.

The Premier’s Award is an opportunity for government to recognize “the enormous contribution of education professionals who go above and beyond to make life better for students in B.C.”

Get more information and nominate your favourite CUPE K-12 member in the category of Outstanding Support on the BC Government web site.

BURNABY – Provincial bargaining dates have been set and the K-12 Provincial Bargaining Committee (PBC) is prepared to start bargaining.

CUPE locals are participating in training sessions set up in their respective regions to get ready for these negotiations. Visit the CUPE BC gallery to view photos.

The K-12 Provincial Bargaining Committee (PBC) met on May 22 and 23 in Burnaby to review survey results and develop proposals incorporating members’ issues and concerns raised through the provincial bargaining survey. One in four members from throughout B.C. participated in the survey that provided valuable input.

“The PBC is a group of dedicated members that collectively have many years of knowledge and experience,” said K-12 PBC President Warren Williams. “They will undoubtedly serve the members of our sector well as we continue to prepare for and begin provincial bargaining.”

The provincial bargaining committee was elected from all regions of B.C. and will meet with representatives of BCPSEA (British Columbia Public School Employers’ Association) to develop bargaining protocols.

Williams said that the PBC remains dedicated to achieving the best possible agreement for the K-12 Presidents Council and all K-12 support staff. The current contract for K-12 support workers expires in June 2019.

SANDSPIT—CUPE Local 2020 will have new members driving school buses in Haida Gwaii next school year, as School District 50 has decided not to renew its contract with private company First Student Canada and will instead bring student transportation in house.

According to the Haida Gwaii Observer, the Ministry of Education will be providing the District with three new 76-passenger buses and one new 24-passenger bus, with future replacements also covered by the provincial government. Under the new system, Haida Gwaii bus drivers will become district employees and members of CUPE 2020 starting with the 2018-19 school year.

Cost was the main issue driving the board of trustees’ vote on April 3 to bring bussing in house. Without the change, under the District’s private contract bussing for next year would have cost an estimated $605,000 for all student transportation, including field trips. The 2018 annual budget for student transportation is $581,000.

“This really is a win-win for everyone,” said CUPE 2020 President Ken Evans. “The students will have more opportunities for field trips. The District will save $200,000 a year. And, as members of our local, the drivers will earn a living wage.”

BURNABY—A bargaining survey for CUPE K-12 members has closed and preliminary results are being tabulated.

“Thanks to all the members who took the time to respond, we received a high level of participation,” said K-12 Presidents Council President Warren Williams, noting that more than one in four members completed the survey. “Over the past 16 years our members took the brunt of cuts to education and they want their voices heard to improve conditions for students in B.C. schools.”

CUPE members participated through either an online or paper version of the survey.  The survey will inform the provincial and local bargaining.

Following are some of the survey results.

Violence in the Workplace:

38% of all respondents have experienced an angry or abusive encounter with a member of the public.

65% of all respondents have experienced an angry or abusive encounter with a student.

85% of EAs have experienced an “angry or abusive” encounter with a student.

Only 22% of respondents are paying less than 30% of their income on housing (the amount that CMHC says is considered affordable).

38% are paying more than 50% of their income towards housing.

42% of respondents are working less than 30 hours a week. 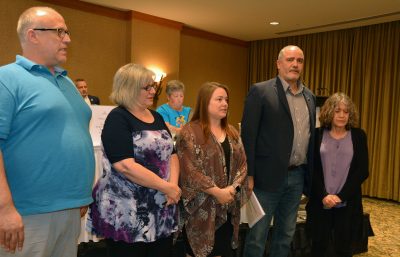 Welcome to the CUPE BC K-12 Presidents’ Council site

We strive to protect quality public education for all.