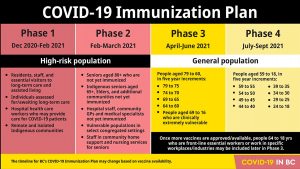 The Province’s immunization plan, announced today,  applies an age-based approach. Phase 1 and Phase 2 focus on protecting those most susceptible to severe illness and death from COVID-19.  Phase 3 and Phase 4 focus on the general population.

Adults older than age 60 have at least 5 times increased odds of hospitalization and mortality, with those over 80 carrying double that risk.

CUPE continues to advocate strongly that support staff be included in prioritized groups who are now included in the later stages of Phase 3.

According to a government news release, as additional vaccines become available, frontline essential workers or those who work in specific workplaces may also be able to start receiving vaccines later in Phase 3. British Columbians aged 69–16 who are deemed to be clinically extremely vulnerable, will be eligible for early immunization in Phase 3.

The plan calls for every eligible British Columbian to receive a vaccine between April and the end of September – a total of 7.4 million doses (allowing for 2 doses per person). The timing of each phase may begin sooner than scheduled.

This plan is the largest in B.C.’s history. Health authorities – in partnership with communities, businesses, and municipalities – will set up clinics in 172 B.C. communities.

Members will be able to pre-register for the vaccine with their mobile devices, computers or by phone. Details will be released by the end of February.