K-12 support workers, members of CUPE 379, reached a tentative agreement with School District 41 in Burnaby in May, after three months of bargaining.

CUPE 379 President Paul Simpson noted that bargaining before the current collective agreement expired did not lessen the seriousness or work to reach a new tentative agreement.

“This was a tough round of bargaining,” said Simpson. “Our members needed to attain some of the gains that mattered to them the most – to enable them to help all students, including those most vulnerable, succeed.”

The provincial framework agreement (PFA) approved by the K-12 Presidents Council in September forms part of the tentative agreement. The current K-12 agreement expires on June 30, 2019. When ratified by CUPE locals and school districts, the provincial agreement will be in effect from July 1, 2019 to June 30, 2022.

Further details of the tentative agreement will not be available until after ratification by all parties. Ratification is expected to be completed by the end of June.

BURNABY — CUPE Locals 727 and 1285 have had positive experiences at the bargaining table with their respective school districts, SD #70 (Alberni) and SD #20 (Kootenay/Columbia)—something that was seldom the case in previous rounds since 2001.

According to CUPE 727 President Nancy Bell, the bargaining environment over the previous 20 years was so rough that her local expected another difficult round this time, so they attended training at the Harrison Winter School and organized members to be “ready to do battle.”

But Bell added that her local also tried a different approach this round, speaking to the employer about the district’s relationship with the members who work for it—not as CUPE members, but as their employees. The employer began to understand that the issues the union was talking about didn’t just affect CUPE as an organization, but also the people who work for the district and live there as well. That’s when things really started to smooth out, she says.

“It was very refreshing to see the turnaround at the table and how at the end of bargaining we felt very respected,” said Bell. “We could see there was a real effort on the employer’s side to listen to the concerns that we’d had – and there were no concessions.”

A big concern for CUPE 727 was hours for education assistants (EAs). The local bargained for additional hours so that EAs working four to five hours now have six hours per day.  “It’s a real boost for EAs who up until now had to work at two or three jobs just to make ends meet,” said Bell.

Bell credits local money bargained in the provincial framework agreement with giving the local the opportunity to bargain Pro-D days for EAs and acquire language for compassionate and bereavement leave that wasn’t in their collective agreement. At the ratification meeting, a member stood up and said that this was the best collective agreement language he had seen in thirty years.

“There was really something in the package for everybody. It’s not often you can do that,” said Bell, noting that the different relationship in this round of bargaining opened the door for better communication: “That’s trust. We’ve managed to get to a point of trust.”

Bell thanks the bargaining committee, CUPE BC and CUPE National for their support as well as her national servicing rep. “It’s not just my positive experience, it’s what everybody has put into it and has given to us.”

Having a worker-friendly government has made a difference as well. In the fall, Bell received a telephone call from Minister of Education Rob Fleming’s office to meet with the Minister.

“I was very appreciative of the fact that he was interested in knowing us as a small community and how cuts had affected us, both educationally and economically,” said Bell. “And I think he really heard us. Whether you’re in a big city or in a small community, we’re still raising children and we hope to send them out to be productive people for our country.”

CUPE 1285 Acting President Heidi Mann and her bargaining committee were mostly new to bargaining so they relied a lot on the experience of the one member who had bargained previously. “The committee was wonderful,” said Mann. “Everyone had some really great ideas and the ideas and conversation around everything was great.”

A big win for members was removing a Letter of Understanding from their current collective agreement that required all CUPE 1285 workers to take one non-instructional day off.  The local used part of its bargaining money to get that day back and they increased self-funded Pro-D funding. Members cheered when they found out that the LOU making them take a day off was gone.

The new collective agreement also increased family illness responsibility days from three to five and CUPE 1285 got some really good language around vacation scheduling. In the past, vacation was granted only at the discretion of the employer and operational requirements. Through bargaining, they removed that language so that now vacation is automatic and no longer at the discretion of the employer.

Previously, 10-, 10.5- and 11-month employees had a hard time scheduling their vacations outside of Christmas and spring break. Those with five or six weeks of vacation were denied. With a new vacation selection process bargained into their collective agreement everyone with five- or six-weeks’ vacation can choose vacation days in advance. This June, members will select their vacation by classification and then in order of seniority, picking blocks of no fewer than two days and no more than five days. After everyone has made a first selection, they’ll do a second round.

CUPE 727 (Alberni) represents approximately 200 members in the Alberni School District. CUPE 1285 (Kootenay/Columbia) also represents 200 members. Their collective agreements have been ratified by members of the locals as well as the school district boards. 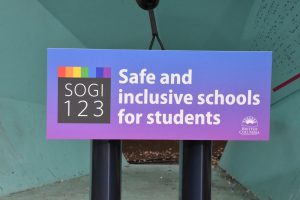 VANCOUVER – The fact that all 60 public school districts have joined the BC SOGI Educator Network is another victory in the effort to make schools safe and inclusive for students of all sexual orientations and gender identities (SOGI), CUPE 15 President Warren Williams said today at an event marking the International Day Against Homophobia, Transphobia and Biphobia.

“CUPE is pleased to be on board for this very important SOGI 123 initiative with the province and other education and community stakeholders,” Williams said, of a collaborative agreement announced by B.C. Education Minister Rob Fleming. “It is important that students are able to attend safe, inclusive schools. They should never feel ‘less than’.”

At a signing ceremony emceed by BC NDP MLA Mable Elmore, Fleming said the agreement celebrates the positive impacts of SOGI-inclusive education.

“SOGI-inclusive education helps save lives, by respecting and honouring the differences of each student, in schools that are free of discrimination, bullying, harassment, intimidation and violence,” he said.

“No student should be excluded or bullied because of their sexual orientation or gender identity, which is why we and our partners share a belief in the power of SOGI 123. It is creating awareness, affirming human rights and helping to fight discrimination in B.C. schools.”

Representatives of B.C.’s K-12 education partners groups formed a new Provincial K-12 SOGI Collaborative to support students of all sexual orientations, gender identities and expressions. They will outline a 3-year plan to “create learning environments that are safe, acceptable, respectful and welcoming for all B.C. students.”

They will identify, support, and provide advice on a variety of projects; support the development of new SOGI resources; offer professional development and training opportunities; and will share information on best practices between schools and districts for the benefit of all B.C. students.

Williams, in his capacity as K-12 Presidents Council President, signed the collaborative agreement on CUPE’s behalf.

SOGI – a resource that provides schools with ready-to-use, grade-level appropriate materials that align with B.C.’s new curriculum – was developed by the ARC Foundation in collaboration with the Ministry of Education, BCTF, CUPE and other provincial K-12 education partners, UBC’s faculty of education, school districts and LGBTQ2+ community organizations. 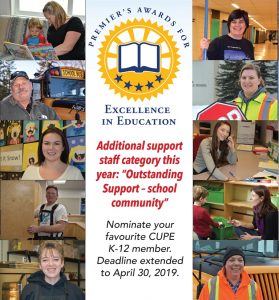 BURNABY – The nomination deadline for the 2019 Premier’s Awards for Excellence in Education has been extended to April 30 with award categories updated.

“We are pleased that the work our members do in schools throughout B.C. is recognized and we encourage locals to nominate members for these awards,” said CUPE K-12 Presidents Council President Warren Williams. “Adding another support category makes these awards inclusive and open to all CUPE members who provide excellent service in B.C.’s schools.”

Full details on categories and the nomination process are available online, along with nomination forms.

The Premier’s Awards for Excellence in Education celebrate the contributions of teachers, administrators and support staff who make a difference in B.C. schools and who are “vital to the cultural, economic and social well-being of the province.” Nominations will now close on April 30, 2019.

BURNABY – The Ministry of Education announced this week that nominations are now open for the 2019 Premier’s Awards for Excellence in Education.

The criteria for both awards include contributing to a healthy, safe and productive school community; creating an engaging and exciting environment; building collaborative relationships with other education professionals; and supporting students.

Full details on categories and how to nominate someone are available online.

The Premier’s Awards for Excellence in Education were created to recognize the contribution and celebrate teachers, administrators and support staff who make a difference in B.C. schools and who are “vital to the cultural, economic and social well-being of the province.” Nominations close on March 31, 2019.